If you’re one of the special few who may have visited SusanDaffron.com in the past, you may have noticed that my site looks a little different now.

For one thing now it’s a blog. For another thing, it now contains pretty much everything I’ve ever written. So instead of being a 6-page HTML site, it’s a 2,000 page (?) WordPress author site with tons of categories and plug ins.

For the slightly geeky among you, here’s what’s behind SusanDaffron.com

WordPress running the Genesis framework and the Prose theme and an bunch of plug ins, including:

The great migration came about because our old server that hosted our many Web sites (named Bullet) finally died. It wasn’t really an untimely death, since it was old.  But there really isn’t a good time for all of your Web sites to go down.

Be prepared to die

Fortunately, the nice folks at our hosting company warned us that Bullet was feeling sick. So we were in the process of moving content off of the machine before we went on a 1,800 mile road trip. Because servers seem to intuitively know about Murphy’s Law, Bullet decided that while we were somewhere in deepest Utah would be a fine time to die permanently.

Being at a Motel 6 in the middle of nowhere and discovering you have no email or Web sites is not a happy feeling. But we got over it. Road trips are good in that respect. You just have to keep driving.

After years of depending on the Internet for our livelihood, in a way it was sort of liberating to have NO web presence for a while. It probably confused quite a few spammers too. (What a shame.)

Many years ago, I used an early version of WordPress and hated it. I’ve already done one export of content out of a WordPress blog and I hope to never go through that again. I’m pleased to report that my experience this time bringing content INTO WordPress has been far better. Here are a few things I learned: 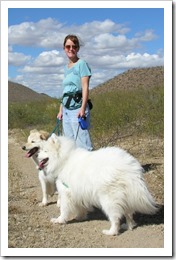 I also redid the LogicalExpressions.com site, which now has information about all our books and nothing else. So all of the book web sites point to custom sections on the LE site. That involved creating a lot of custom graphics and like this site, it’s still a long way from done.

But after a few weeks of active geeking, at least most things are put back together and I can definitely get email anyway. And that’s good news for the fuzzy white dogs who really wanted to go out for a hike after all that time on the road