Usually I do a cover reveal long before the book is released, but not this time. I just uploaded the files to CreateSpace, so I’m a bit late in revealing the cover.

But without further ado, here’s the cover Sensing Trouble, which is the first book in a new spin-off series that features two new characters: Meg Jennings and Riley O’Shea. Although the story starts in Alpine Grove, it goes from there. Instead of being a romantic comedy, it’s more of a mystery. But it’s set in the same time period and you’ll get to meet a new dog named Zelda, who is VERY cool. And yes, that Zee on the cover 🙂 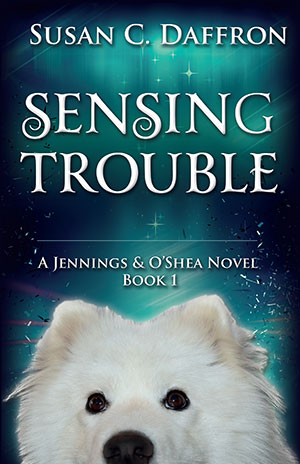 Here’s the description of the book:

Some trips are longer and stranger than others.

So far, 1997 has been a spectacularly bad year for reporter Meg Jennings – and it’s only March. Uncontrollable, debilitating visions have forced her to give up driving and take a leave of absence from her job. When her mother demands that she visit without explaining why, Meg sets aside her worries and heads for the small town of Alpine Grove. But her arrival is greeted by an empty house and no sign of Mom.

Help arrives in a cherry-red classic convertible Mustang with Riley O’Shea behind the wheel and his fluffy white dog Zelda riding shotgun. Summoned by his father, Riley is disturbed to find that Dad has disappeared along with Meg’s mother. Meeting his possible future step-sister for the first time, he learns that he isn’t the only one who has been plagued with sensory anomalies that doctors can’t explain.