I don’t know you or about the rest of the world, but lately the news has been bringing me down.

Perhaps you’ve seen the cartoon with the caption that says something along the lines of “my need to be well informed is in conflict with my need to remain sane.”

Yeah, that would be me.

There’s a reason I write fiction that is a) humorous b) set years ago when the Short Fingered Vulgarian was just a D-list celebrity loser who hosted the Miss Universe contest.

For me, fiction is an escape and one of my favorite things is writing a scene and actually making myself laugh. To me that’s when writing is the most fun. (I don’t know how people write post-apocalyptic fiction; I’d want to throw myself off a cliff.)

In any case, if like me, you are looking for something to laugh about, here’s a fun contest! The cool folks at the ReadFunnyBooks.com site are giving away five comedy classic books including:

When you enter, you can win these five comedy classics and you’ll also receive five days of curated comedy e-book suggestions that are either free or $0.99, delivered straight to your inbox.

One of the books is mine, so hey, even if you don’t win the bundle, I think you still win. 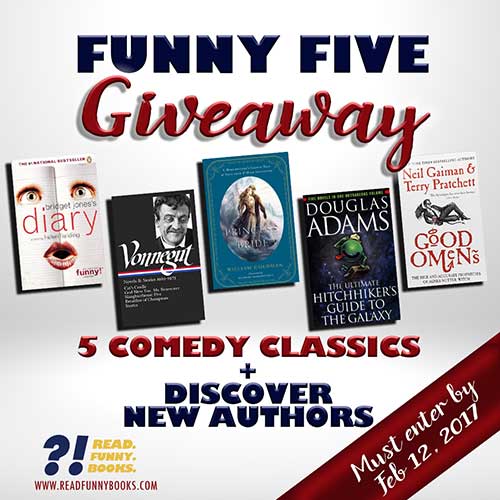