The personality and behavior of an adult dog is affected by its genetics and its environment. The events (or lack of events) during a dog’s puppyhood have a big impact on the dog it will become. You probably won’t have any control over what happened to your new puppy during its first 7 or 8 weeks. But after you bring the puppy home, you can help her develop confidence by exposing her to new sights, sounds, and experiences. This process is called "socialization."

The first few weeks you spend with your new puppy are important in the socialization process. You are taking the little pup from everything she has known: her home, littermates, and her mom. So it’s not unusual for the puppy to be confused. Don’t coddle your pup during this time, but don’t overwhelm her either. Introduce your puppy to new experiences slowly in controlled situations. For example, introduce your puppy to a few new people or the neighbor’s dog, but don’t overwhelm her by having a huge party with 50 people and loud music.

The socialization process continues after puppyhood as well. Until the dog is a year old, it’s important to make a conscious effort to expose the dog to new things. Take her out for walks, car trips, or even to work. Invite guests over and teach your dog how to greet people politely. Take her to obedience classes where she can learn how to be around dogs and people in a civilized manner.

Dogs that aren’t socialized during their first year often become shy and afraid of new experiences. So it’s important to take the time to involve your new puppy in as many activities as you can. Having a well-socialized dog is better for the dog as well as the owner. 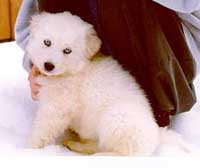 A tiny pup who needs some socializing.