Sometimes we become so attached to a person, an idea, information, or even a little paragraph of writing, we just can’t let it go. 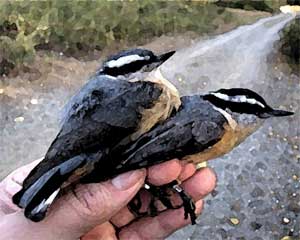 Ask yourself this:
What are you clinging to that no longer serves you?

Sometimes it’s ideas that are fueled by comparing yourself to other people. If you spend a lot of time on social media or get a lot of email newsletters from Internet Marketing types, you may be feeling like “everyone” is successful online except you.

When you compare your simple, boring life and your trivial business ideas to all those folks who are bragging about their perfect existence, you start feeling pretty terrible. The more you compare, the worse you feel. Yet you also feel like you can’t stop reading or following that person’s advice because they know what’s best. You’ll be missing out.

I seriously doubt it.

Let Go of Things That Make You Unhappy

Happiness books often suggest that you stop watching the news because mostly it just focuses on bad news. Reading about murder and mayhem makes you feel unsafe and unhappy.

Letting go of the notion of being “informed” about every day-to-day happening in the world is difficult for some people. But most people who stop focusing on news–particularly watching news on television–report feeling a lot better about the world around them.

I stopped watching TV news in 1980 after the attempted assassination of Ronald Reagan. I was living near Washington DC and the news shows ran the same clip of the president stepping off the curb repeatedly. I felt sad, unsafe, and miserable.

Then I started to feel angry. The news was manipulating my emotions with the same words and images repeated in a loop, just so they could get higher ratings. It was like a competition across the networks to see who could put the most melodrama into their reports.

It made me sick and I haven’t watched a news program since then.

And yet my life has moved on. I still know what’s going on in the world, but I don’t know every single awful detail. I don’t have nightmares about the falling of the Twin Towers because I didn’t watch that TV news clip 700,000 times. I don’t think there’s anything wrong with that either.

What Are You Letting In?

As a solo business owner, I realized I was having a somewhat similar experience because of my exposure to online marketers. I had a whole lot of newsletters, Facebook status updates, tweets, and other information bombarding me.

Like the televised news, today’s Internet Marketing and social media landscape has become a competition to see who can garner the most clicks with their headline or status update. Over time, this information overload can wear you down. Everything starts to feel like a scam designed to part you with your money.

“THIS program is the one that’s going to change your life. Really.”

Too many people end up tired, broke, and depressed when these fix-everything-in-your-life programs fail to deliver. Even if you don’t “invest,” you start to feel cynical about all of it.

Is that really how you want to feel?

I decided my answer was no. I don’t care if GooRoo Guy is in Aruba with his hottie girlfriend (or for equal time, if GooRoo Gal is hanging out in Paris with her bohunk either). I don’t want to know. I also don’t need to know more about how GooRoo Guy or Gal markets his or her business because I’ve read enough.

As with the TV news, I simply disconnected myself from what I don’t want to see.

Give Your Own Ideas Space

By letting go of other people’s information and ideas, you allow more space for your own. Instead of anxiously worrying about what other people are doing and slavishly comparing yourself to others, focus on your own world. Right now, could you:

Any one of those things will probably do a lot more for your business than paying attention to anything anyone else is doing.

Almost inevitably being productive makes you feel better about your business. And there’s nothing wrong with that. Think about those things that make you feel bad and just let them go.

You’ll be glad you did.