James has been doing a lot of chipping lately because a lot of trees didn’t make it through the winter and I want chips for my garden pathways. The other day, while he was chipping one of the piles of tree branches, he found a litter of four baby snowshoe hares.

James has large feet, so it’s a miracle he didn’t stop (or worse, chip!)the little guys. I was out in the garden and James came over and said, “you have GOT to see this!” Although I have been dealing with a seemingly never-ending fencing project to keep snowshoe hares from eating their way through my garden, the little guys are totally adorable. 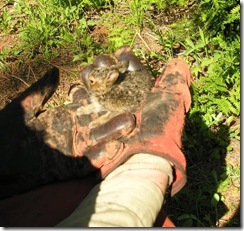 James picked up the baby bunnies (which are call leverets, by the way) and moved them to a safer location in the shade under a nearby grand fir. 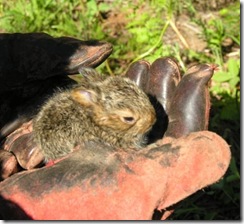 They didn’t like being in the sun, so this guy looks a little squinty. 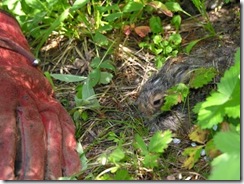 Here’s one in his new home in the shade. The leaves are wild strawberry plants, which are much smaller than cultivated berries. 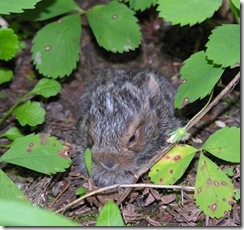 James looked up snowshoe hares online and thinks these are the Lepus Americanus Pineus subspecies of snowshoe hare. A litter of 2 to 4 is common, so we are hoping that he found all the babies. The next day they were gone, so with any luck Mom came back and found them.